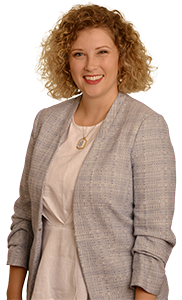 Jaron Lines was born and raised in rural southeast Arizona. She received her Associates of Arts in Music (voice and violin) at Eastern Arizona College. She then transferred to Southern Virginia University to finish her undergraduate career, receiving a Bachelor of Arts in Politics, with a minor in music. Coming back to the west coast, she attended Golden Gate University School of Law, where she received her Juris Doctorate, with a specialization certificate in Civil Litigation.

While in law school, Ms. Lines had a variety of work experiences—she worked for the Honorable Magistrate Judge Maria-Elena James and the Honorable Magistrate Judge Kandice Westmore in the United States District Court, Northern District of California; she worked at the United States Postal Service Legal Office doing EEOC defense; and she worked for the Housing and Economic Rights Advocates working to protect consumer rights. Additionally, Ms. Lines was an active member of the Student Bar Association Board of Directors and the American Constitution Society Board of Directors, and served as an associate editor on the Environmental Law Journal staff.

In her free time, Ms. Lines enjoys crocheting, singing, playing her violin & ukulele, and golfing. She currently plays violin and sings with the Awesome Orchestra Collective.